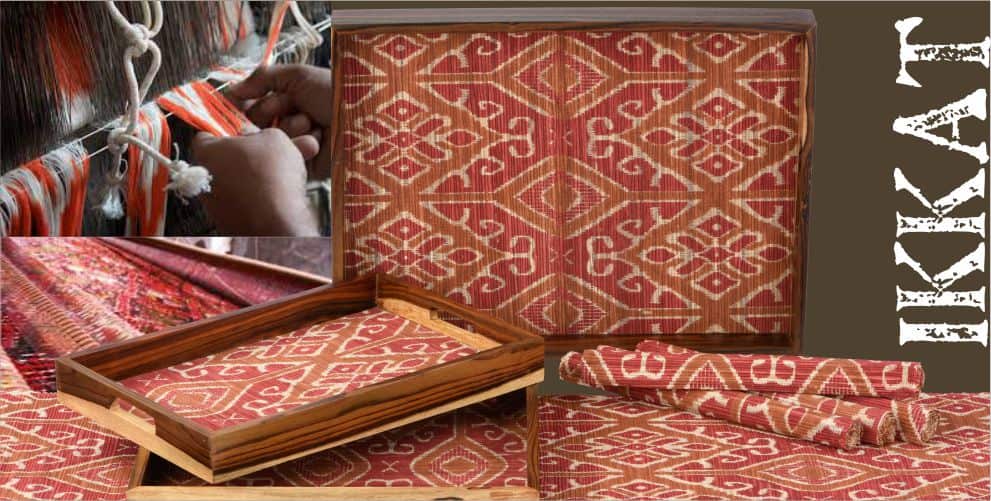 The Magic of Ikkat

Did you know that Jaspe, Kasuri, Patola, Pochampalli, Bandha, Bandhani and Ikkat are different words to describe the same weaving technique that has been practiced independently and simultaneously in different parts of the world? Did you also know that Ikkat is a kind of tie and dye process to create a pattern in fabric and the word is used to describe both the process and the fabric?

Ikkat ,as we popularly know it comes from the Indonesian word to tie or to bind. Very simply, it is a process of weaving a design in the fabric where the warp or lengthwise yarn and weft (breadth wise yarn), is tied with a resist and then dyed. This is repeated several times depending on the design that the weaver has in mind. The dyed thread is then mounted on the loom and woven to bring out the pattern. Warp Ikkat is the easier weave and more common while Weft Ikkat is more slightly more complicated. But undoubtedly, the most complex is the Double Ikkat which uses precisely dyed yarn in both the warp and weft yarns and produces stunning fabric that is really sought after. This weaving technique is practiced largely in India – Patola from Gujarat, Pochampali from Andhra Pradesh and Bandha in Odisha being the most popular. Other parts of the world where Double Ikkat is made include parts of Gautemala, Cambodia, Indonesia and Japan.

Whether simple or complex, Ikkat is a test of skill. The weaver has to place the yarns almost like a jigsaw puzzle, fitting the warp and weft yarns precisely to form the pre-planned design or pattern. Time consuming and elaborate, it is no wonder that this fabric was considered prestigious and symbolized wealth and power. But some cultures believed this fabric had mystical and magical powers!

Wool, silk and cotton are used to make Ikkat fabrics and the exquisite, slightly blurry edged patterns and motifs make it a popular fabric for use in garments, furnishing and accessories. Ikkat inspired designs are also used to decorate ceramic pottery and tableware, trays and boxes. Ikkat shawls make great throws while woven Ikkat is popular as drapery and upholstery material.

Naturally, the colours, designs, motifs and styles in Ikkat vary, reflecting the different cultural and regional influences. One thing remains constant, however, is the irresistible beauty and universal appeal of this ancient, hand-woven fabric.